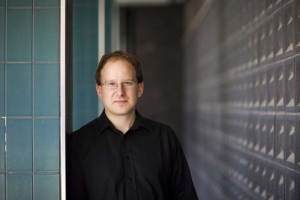 Anyone remotely familiar with the new music scene in Great Britain will have encountered James Weeks in one of his many guises – conductor, composer, director, writer, enabler. A cheeky part of me sees him in this way as a sort of pre-Faustian Thomas Adès. He is a brilliant conductor – his vocal group EXAUDI is widely acknowledged as one of the very best in the business – but he is not as well-known for his own music. Which is a shame, because his is one of the most distinct voices of his generation in English composition.

Moreover, I think it is a distinctly English voice, although it’s hard to explain why. Not in any crude nationalistic sense, you must understand, but in the same sense that makes ‘frost and snow fall, mingled with hail’ (‘hreosan hrim ond snaw / hagle gemenged’; The Wanderer) one of the most quintessential lines in English literature, or the sense that informs Purcell’s brutally honest passacaglias, the bleakness of the landscape in Britten’s Peter Grimes, and Finnissy’s empirical dissections of the world’s music. It’s a little bit cold, a little bit stand-offish; but, from that, capable of revealing great beauty in things.

When I listen to Weeks – and, as he says below, his pieces do often sound very different from one another – I am aware of a consistent attitude or stance that points towards a particular aesthetic. This consistency arises, I imagine, from certain technical procedures devised by the composer and adapted for successions of pieces (some of which are referred to below). But deferring the perceived aesthetic effect to the realm of technique is not to diminish its reality. If modernism taught us anything, across all the arts, it is that technique and aesthetic can very rarely be separated. (When they are, by the world’s more naive epigones, the results are invariably disastrous.)

The Catford Harmony, one of a series of ‘London Harmonies’, is from the gnarlier end of Weeks’ style: its punching rhythms and wide intervals spool out grids of sound, like a demented ticker-tape machine. The music shapes the very air around it. On one level it is quite crude music, but Weeks’ real gift lies in the construction of his canons, which never fall into the trap of sounding well most of the time, but flagging occasionally ‘but we’ll leave it because that’s what the process demands’. The energy, and thus the interrogation of the fundamental materials, never wavers. In a world of ephemera, deceptions and cynical exploitation, music of such honesty and commitment is to be cherished.

Tim Rutherford-Johnson: Composing is an anachronistic career choice for the 21st century, isn’t it? Why do you do it?

James Weeks: I honestly couldn’t imagine myself not doing it. I’ve been set on being a composer since I was nine, so clearly there is an overriding inner compulsion within me to write which I don’t question and never have. In the last few years, when my working time has been torn between doing things that earn money (mainly conducting) and writing, there has been a certain heightened urgency to the question of ‘why?’, but all I can say is that I feel lost without regular recourse to the desk: everything gets out of kilter and I get miserable. So I think I am shackled to this ‘anachronistic career choice’ for good!

TR-J: How do you think composing, being a composer, is different now than from 20–30 years ago?

JW: Well, staying with the idea of composing being anachronistic (in the way I do it, with pencils, manuscript paper, scissors and paste), I think things have changed markedly in the ten years I have been working, let alone 20 or 30. When I was studying at the beginning of the last decade (I did an MA and PhD at Southampton from 2000–05), there still seemed to me to be a basic hegemony in place of notated music, acoustic instruments, composition-as-discourse, a real sense of developing modern/post-modern/experimental traditions. It may be just that my perspective has changed since I am no longer attached to a university, but I think that recently the culture of what you might call Sound Art and extended/multi-media has much more profoundly penetrated new music, both in obvious ways (the ubiquity of electronics) and less obvious ones – there is a major aesthetic shift going on at present and I think the next ten years will be really important ones for the art-form. My impression is that a lot of what is going on in this area is very superficial, often (ironically enough) quite conceptually dated, and driven in large part by promoters who want to look cool; but beneath that there are currents which are altering both the way the composer works, technically speaking, and the idea of composing and composition. It remains to be seen just how anachronistic my rather traditional idea of a composer actually is! Being of an experimental bent, I’m very enthusiastic about the more radical things going on, but sometimes I feel a bit sad that fewer and fewer people are listening to music in the way that they did, because in my view it was more interesting.

TR-J: How important for you is it to work with performers on a new piece? And what happens when that piece is taken up by another player/group?

JW: I conduct or play in a lot of the performances of my music that take place at the moment. I don’t think that’s ideal as it looks like you’re a bit of a one-man-band, but that’s the way it is just now. I’m very happy being in charge of performances because I’ve found that the style of playing or singing I want doesn’t necessarily come naturally to many performers, so it’s good to be on hand to get that right. I find often players are expressive in the wrong way – too Romantic or rather Expressionist in the sort of standard late-20th century repertoire mode – whereas in fact if you wanted a model, Early Music style would be a lot closer (though not quite right either). When other groups or players take up pieces or I’m not on hand to work with them, I just take the attitude that I’m delighted they’re playing it at all and don’t get all Ligeti-ish about it (he was famous for his high-handed way with performers). Sometimes that ends in tears (my own) but I’m learning slowly who ‘gets’ my work and who doesn’t. It’s a process.

TR-J: What is musical material for you?

JW: I’m very materialistic about material. It’s something absolutely concrete, like bricks or mud or water. There are two different things here though: there is the sonic material, the physicality of the sound itself, and then there is the material on the page, the ‘music-stuff’, which gets shaped and played with and permutated. I keep both areas separate and then they get put together in the sounding result: what excites me is the way these two material planes act on each other in performance, often very unpredictably. Some pieces privilege one materiality over the other, the balance is always a bit different, which is one reason why my pieces often sound very different from each other, even when the basic way of working is very similar.

TR-J: A lot of composition is about ways of proceeding, extending an idea in time. What sort of decisions are you dealing with as you compose?

JW: For the last few years I have been working with the most basic or elemental of musical materials that I can. Talking of mud and bricks, these really are musical building blocks, very simple or crude. These preferences are hard-wired for me – I feel completely at home with them. My ways of proceeding are similarly basic at the moment, very simple permutations or patternings using the minimum of resources – born of the urge to see what I can get from the most barren of musical ground. As I naturally write linearly, most pieces tend to be contrapuntal layerings of these simply-permutated lines, quite often arranged into blocks which then get replaced by other blocks, and so on. Canon is another central technique for me. So the decisions I am taking are firstly to do with the selection of materials, and secondly to do with the way things are going to be permutated or extended. Most of this takes place at a pre-compositional stage. Timing and placement can also be pre-compositionally decided, though not always. In short, composition literally is ‘putting together’ for me: I write to find out what the consequences of my decisions are when everything is put together. And the decisions themselves are not primarily ones of musical efficacy, but are stringently aesthetic in character.

TR-J: What projects are on your desk at the moment?

JW: Dozens! So many ideas for pieces – no time to write them. In terms of commissions (or requests), I have a flute piece to write for the autumn for the Japanese flautist Reiko Manabe, and then the next big piece is the climax to my London Harmonies series, The Spitalfields Harmony. This will be for choir (New London Chamber Choir) and ensemble (London Sinfonietta) for next year’s Spitalfields Music Summer Festival. Beyond that I am planning a setting of Pessoa for a handful of voices and instruments for next autumn, and a series of short instrumental pieces with tape.

JW: I think a line of minims would be nice. Then I would think of something to put on top of it.