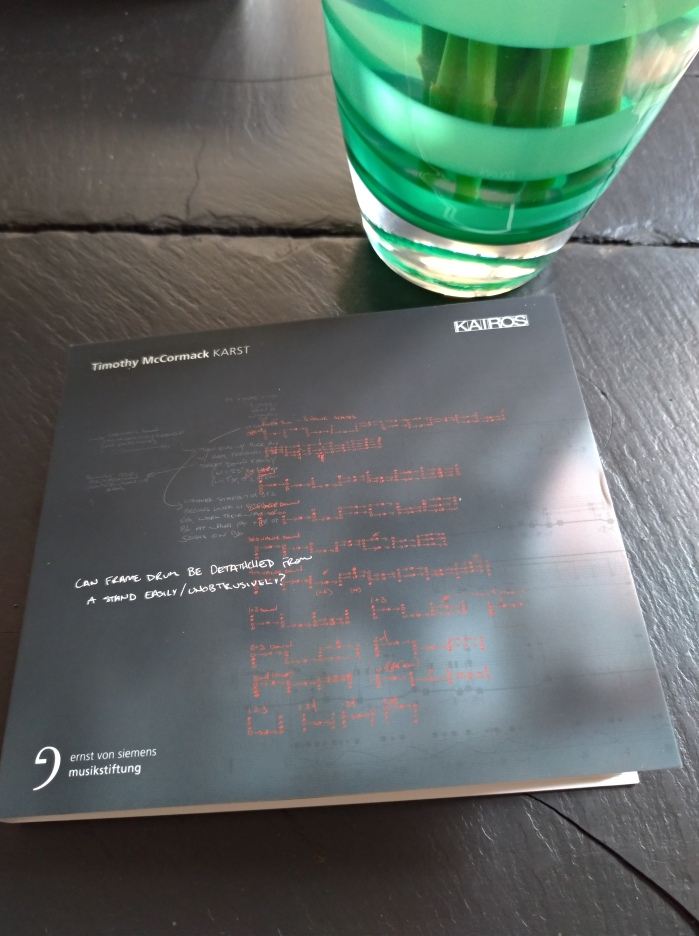 Last autumn, I was fortunate to be asked – separately, but serendipitously – to write essays on five of my favourite artists: Apartment House, Chaya Czernowin, Evan Johnson, Liza Lim and Timothy McCormack,. Although I enjoy most writing, it’s rare to be able to take such pleasure from it, and over such a sustained period – eight weeks through September and October in this case. It was a wonderful time. With the release this week of McCormack’s debut CD (on KAIROS), the events and CDs for which I wrote those essays have finally all come to fruition. I’m moved therefore to share a little extract from each here. I particularly like the fact that I have written about some of these musicians for a decade now: having them all together engendered a profound sense of ‘what next?’, but also felt like a victory.

The three liner notes below accompany CDs that I believe are among the essential releases of the last few months, and I recommend them to you as highly as I can.

A mountain’, wrote the Scottish novelist and naturist Nan Shepherd (1893–1981), ‘has an inside’. Like Shepherd’s ‘living mountain’, McCormack’s music also has an inside. To be in a landscape is to be part of it, to participate in its creation, evolution and destruction. We do not observe, we do not consume, we do not utilise, we do not inhabit or farm or pollute landscapes passively. They enter us as we enter them. For karst survey McCormack told the flutist Zach Sheets, ‘I really wanted to put the listener on the ground walking through it and not understanding the connections between its features. … I wanted to put the listener really in the middle of this landscape, and you’re only seeing what you’re able to see – you don’t see how the whole thing connects until you’ve walked through it all.’

From sleevenotes to Timothy McCormack, KARST, karst survey, and you actually are evaporating, released by KAIROS.

In the final movement of [Extinction Events and Dawn Chorus] is a remarkable sound, based on a real phenomenon: the ‘dawn chorus’ of coral reef fish that takes place in the changing light of morning; a mass of clicking, rasping percussive sounds, transcribed by Lim through the sound of Waldteufels and windwands being swirled in the air. As the music passes theoretically below the range of human hearing (thanks to a contrabassoon that has been extended with a metre of plastic tubing), we end listening to a song that we can no longer know nor understand, looking to a future perhaps no longer meant for us.

From sleevenotes to Liza Lim, Extinction Events and Dawn Chorus, released by KAIROS.

A hyphen sits between. A hyphen is small. Its use implies the presence of two more substantial items – words, or parts of words – on either side, which give it its function and meaning. Those words constitute a sort of white or negative space, whose presence and influence can be inferred even if the words themselves are not spoken. It is an image articulated spectacularly in a favourite artwork of Johnson’s, the pen and ink drawing Der Hafen von Antwerpen beim Scheldetor (1520) by Albrecht Dürer. Dürer’s picture inverts the normal rules of Renaissance perspective by becoming more detailed the closer one gets to its vanishing point. At its centre, where the outlines of buildings and ships collide, it reaches a state of almost self-negating intricacy, the profusion of lines leading to less, not more, definition. But outwards from this point the picture tends towards white space, and indeed more than half of the page is completely white, including the large expanse of dockside pavement on which were are standing. Johnson’s music can be understood in large part in response to this picture – and it directly inspired his 2014 string quartet inscribed, in the center: ‘1520, Antorff’. The works on the present recording, written before this quartet, reflect alternative responses to the dialectic of compression and emptiness revealed by Dürer.

From sleevenotes to Evan Johnson portrait disc, also on KAIROS.

Despite a continual swinging between opposites – from art gallery to concert hall, from detailed notation to allusive text, from the heart of Europe to the fringes of New York, from the cutting edge to the historical – Apartment House have created an artistic identity that transcends those differences . . . In part that identity is guided by Lukoszevieze’s own tastes, contacts and performance opportunities. He has described a word of mouth aspect to the group’s artistic direction that is driven by enthusiasms and personal relationships rather than publishers’ catalogues or occasion-related prestige. The group’s direction is also driven by Lukoszevieze’s own reading of musical history (shared with Cage), not as a straight line going in one direction, but as a series of rivers, and Lukoszevieze delights in discovering or reviving works and composers – particularly from the 1960s and 70s – that have left only the faintest traces on history. Not even the early experimental or minimalist works that might be referenced in textbooks of the time, but those that were published only in small-run magazines, or were performed only once, or that for any other reason might have slipped beneath the floorboards of history.

In a musical world in which fragility and precariousness are countered by institutionalisation and formality, Apartment House have made flexibility into a virtue. The group’s name alludes to Cage’s Apartment House 1776, but more significantly to the idea of different rooms within a single building: rooms with different functions, rooms on different levels, rooms close or far apart, some rooms with people in, some that are empty.

Falling in love is a huge risk. To share your life and your self with someone is to risk pain and suffering – and in extreme circumstances even torture and death. This is very rare, of course, although movements like #MeToo have made us all more aware of the amount of physical abuse that does take place. And even in a kind and caring relationship in which each partner is able to grow, to love is to lose something – other lives, other loves. It means giving up our autonomy and independence in order to become part of something larger. It is an opening up that is both physical and psychological. In Czernowin’s words: ‘In all this process of falling in love or opening your life to somebody else there are so many emotions, and they are all very focused, all very concentrated. It is almost like the whole body – and the whole body of the personality – know that they are going to undergo a huge change. And that change is described to us by society as something so idyllic: not many people talk about the risk, of opening an organism into another organism.’ Insofar as it tells a story – or describes a series of scenes – Heart Chamber does so in ways that engage us listeners aesthetically, psychologically and physically. As far as is possible, we are drawn into the same adventure into the unknown as the lovers themselves.

2 thoughts on “Some recent writings”