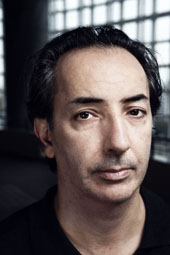 Regular readers will know that I’m a strong supporter of the London Ear Festival, launched a couple of years ago by Gwyn Pritchard and Andrea Cavallari. The festival was always intended to be biannual, but the first year proved such a success that Gwyn and Andrea couldn’t resist putting one on the following year as well. This year they really are taking a break, and are putting on … another festival.

OK, this is a smaller venture than in 2013 and 2014, but not by that much. And although its programme is reduced, it makes the most of the combination of intimacy and exploration that has characterized the London Ear so far. Highlights of the programme for me are probably another opportunity to hear Pierluigi Billone’s wonderful Mani.Gonxha for two Tibetan singing bowls, and the video-accompanied performance of Feldman’s Palais de Mari by Luisa Valeria Carpignano.

As always, concerts will be at the Warehouse and Cello Factory in Waterloo. It all starts this Thursday and runs through to Sunday evening.

Gwyn Pritchard and Andrea Cavallari hadn’t planned on running a second edition of their contemporary music festival, the London Ear, quite so soon after the first. Yet that proved such a success last year that they consented to do something like an edition 1.5, a halfway house before a larger event, perhaps in 2015 or 2016. But the process overtook the planning, and before long a four-day programme of events was in place and the Second London Ear was on its way.

Taking place a month ago now (sorry …) this was an event that very much built upon its achievements last year. The festival seems to to have found an audience for itself – one that I’m pleased to say includes many unfamiliar faces. The three young performers who were introduced last year – Jenni Hogan (flute), Stephen Upshaw (viola) and Tom Bayman (cello) – were given a second opportunity to show their work, in the festival’s opening reception concert. Once again we were hosted by the Warehouse and Cello Factory in Waterloo, this time surrounded by the paintings of Gillian Ingham. And once again there was a very convivial, I guess ’boutique’ atmosphere that comes from this being a compact festival that places a premium on interaction and engagement.

As well as the three young performers, this year the festival players were accordionist Eva Zöllner, violinist Victoria Johnson, the London Sinfonietta, 7090, We Spoke, Uroboros, and an impromptu trio of three soloists from Berlin, Antje Mart Schäffer (soprano), Franka Herwig (accordion) and Matthias Bauer (double bass). I was also involved in a small way, hosting first a preview show on Resonance FM a week before the festival, and then chairing three composer roundtable conversations before the evening concerts on Friday, Saturday and Sunday.

I missed the daytime concerts by Zöllner and Johnson, as well as 7090 and We Spoke’s joint brunch concert on the Sunday, but I still made it to six more in the four days. Too many pieces and too many performances for me to give a detailed run-down of everything, but here are some of my highlights:

Lots of good things then. But with the festival looking ahead to its third instance, it’s not inappropriate to cast a more critical eye too. One thing that does characterise the London Ear is its reliance on smaller pieces, generally for just one, two, or three instruments. Besides helping with certain structural and financial impositions, this has some artistic benefits: the festival is able to shine a light on some overlooked areas of the repertoire that don’t attract much support from the larger institutions. It is also able to include an attractively wide spread of composers within a relatively short space of time. And the listening experience itself gains a certain intimacy when the concerts are on this scale, as I have already suggested. These things are all great, and are essential to the festival’s style.

However, at the same time this approach does mean that many of the composers who are featured are represented only by their slighter compositions. When so many of these are so rarely heard in the UK at all, it seems a pity not to be able to profile one or two of them to a deeper extent. The same might be said of some of the better-known composers too. It was a shame, for example, to have 7090 more or less in residence at the festival, but to have them only perform two pieces from the bas&koen&nora set that Michael Finnissy had written specifically for them: these were the first UK performances of any of these fascinating pieces (I believe), and given that the work is so closely associated with 7090 themselves, we may have to wait a while to hear the whole thing in this country. (You can buy a recording, however, which I recommend.) A little more variation in concert format might help accommodate this sort of thing – rather than every concert containing lots of shorter pieces. This would have helped break up the rhythm a little and, ironically, helped give the whole festival a little more focus.

Another awkward case was Serge Vuille’s performance of the flashy percussion solo Assonance VII by Michael Jarrell, as part of the 7090/Berlin trio Saturday evening concert mentioned above. Most of the music took place in a small space at the centre of the stage, between the piano and two music stands. But one end of the stage was occupied by a very large percussion set-up that visually dominated the space yet was only used for the one piece. (Here’s a video of Vassilena Serafimova playing Assonance VII in Eindhoven to give you an idea.) I enjoyed the piece, and Vuille’s performance was outstanding, but its presence on this occasion really unbalanced what was otherwise a programme with a very distinctive character of its own. The fact that this concert – which otherwise involved no Swiss players or composers – was the one supported by the Swiss Arts Council Pro Helvetia, and was followed by a reception hosted by the Swiss Embassy, did give one pause for thought, however, about the delicate but inevitable balance between the artistic and the pragmatic.

I’m quibbling. I realise it’s very difficult to execute both things that I’m asking for here: a coherent, focussed programme that is also diverse, original and multi-faceted. The fact that it’s all done (still) with no support from any of the major UK arts organisations is a fact both remarkable and shaming. The London Ear remains an excellent new venture that I hope will cement a place as an essential part of the London new music calendar; if it can do so without having to depend on the generosity of overseas embassies, so much the better.

Following its successful first incarnation, it’s great news that the London Ear Festival of Contemporary Music will be returning at the end of this month. When the Ear launched last year in close proximity to the more widely publicised London Contemporary Music Festival, I feared that they might end up crowding each other out. But in the end, they’re quite different styles of festival, with quite different musical remits. Not bad going, if you’ve got the impression that contemporary music is blinkered and narrow-minded.

Of the two, the London Ear is the more apparently traditional, in that it all takes place in a concert venue, rather than a car park, and there are seats and central heating and that sort of thing. (Plus on-site food and interval wine.) But at the same time, it’s more adventurous in terms of repertoire. Certainly its directors, Gwyn Pritchard and Andrea Cavallari, are following through on last year’s promise to focus on (mostly European) composers who are rarely or never heard in the UK – this year’s programme includes music by Georg Katzer, Anne LaBerge, Helmut Zapf and Helmut Oehring. More than half the programmed works are world or UK premieres.

The programme features nine concerts in all, with performances from, among others, the London Sinfonietta, Trio 7090, We Spoke and Uroboros. If had to pick favourites on paper, I’d say the two evening concerts on Saturday look most tempting: plenty of potential for weirdness in the 6pm concert by 3 from Berlin, 7090 and Serge Vuille, featuring music by Kagel and Oehring, and a new piece by Zapf; followed music for instruments, video and electronics by Simon Steen-Andersen, Jürg Frey and others at 9.30. Like last year, there are also various fringe events, including instrumental masterclasses and educational workshops for children and teenagers. I will be probably be chairing some pre-concert conversations with composers.

The London Ear Festival of Contemporary Music runs from Thursday 27 to Sunday 30 March. Events take place at the Warehouse and Cello Factory, Waterloo, London. Full details available from the festival website. Tickets start from a fiver.

Update:  Just confirmed: I’m going to be hosting a 1-hour radio show on Resonance FM tomorrow evening (Friday 21 March), 8–9pm, on the subject of the London Ear. I’ll be chatting with festival directors Gwyn Pritchard and Andrea Cavallari, playing some music, and we’ll have flautist Jenni Hogan playing live too. Resonance is on 104.4FM if you’re in London, or streaming online if you’re anywhere else in the world.